What is the best time to travel to Provence?

Winters in Bédoin typically are mild, rather dry and sunny (Ø 3 days of snow). Spring comes as early as mid February when the almond trees start to blossom and can have longer periods (3-4 days) of rain. Summers are hot and dry. Most of the rain falls in autumn, but as up to 40% of the annual rain can fall on one day, it is not typical to have sustained rain periods before November. It can be windy all year round. 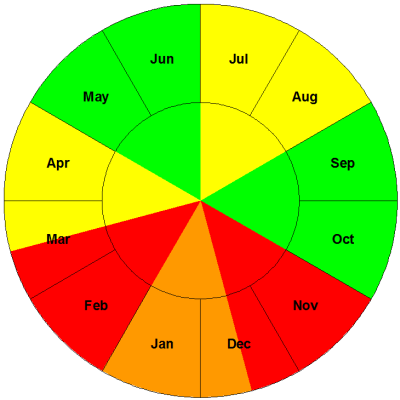 Due to this north wind, called Mistral, the sun shines 2830 hours per year, which is almost the same magnitude as 1500 km further south in Andalucia (Malaga 2910).  The mistral on average blows on 100 days. Bédoin is situated at the south foot of the 1912m high Mont Ventoux and is thus protected from the heavy winds.

With 70 days/year it rains exactly half as much in Bédoin as it does in Cologne. But this in only half of the truth. As showers in Provence come rather abruptly and heavily, there are only 23 days in a year where the sun does not shine in Bédoin. If you avoid November and February the risk that you will not see the sun during your one week stay at the Mas des Templiers is next to zero.

Strong frosts in the night, but at midday the temperature can easily rise above 10° C. Perceived it can be much colder with Mistral, but protecetd from the wind we can eat outside every third day. Best hunting and truffel season.

with some luck hiking in combination with sightseeing

At the beginning still cold, it then slowly starts to warm up. Almond blossom in the second half of February.

More and more trees start to blossom, young green and spring flowers all over. First days above 25°C but it also can get cold once again.

Wet in the first half, usually it gets really hot in the last days of April. The road up to the Mont Ventoux opens. Cherry blossom!

Ideal for outdoor sports and subsequent chilling in the pool.

From May 5th the pool is open (water temp. 16-21°), comfortable Ø air temp. of 23° in the afternoon. Short cold period with strong Mistral around the 15th.

Dry and summerlike, it can get easily up to 35° C. Dinner outside. The mornings are still good for outdoor sports.

chilling around the pool, many family activities like canoeing...

32° max temp is now average! Sightseeing early in the morning. Too hot for hiking unless you drive up Mont Ventoux.

Now you really enjoy the 200'000 litres of cold wet. Up to 40° C during the canicular days. Long nights with a chilled bottle of Provence rosé!

Ideal for outdoor sports and a quick chill in the pool.

The month with most of rainy days and so few sunshine as in January. It can be nice , but it also can be really awful.

Shortly before Christmas it gets colder and the autumn rains come to an end. The truffel season starts with the first frost.

The Carpentras weather station is 13 km away from Bédoin, situated at 100 m above sea level. Our house is 300 m higher, at the edge of the forest. As a rule of thumb you can substract 2° K from the highest temperature in Summer and add 2° K to the minimum temperature in Winter. Our climate is thus less extreme. 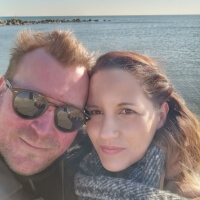